Despite the hard work of our supporters it is now clear that there will not be a sponsor for #LBBill from this year’s private members’ bill ballot. None of the top seven MPs who were the focus of our efforts seem to have a real commitment to disability rights and all have chosen to adopt other causes.

This is of course a huge disappointment for everyone, but we always knew changing the law to help make a reality of disabled people’s right to live in the community with equal choices would probably take some time. We will be back for the 2016 ballot armed with the knowledge gained from this year (see some initial thoughts below).

We don’t have to wait until next June though. We are expecting two other developments that could give us a chance to get the ideas in #LBBill into law:

1. The Law Commission (the official body responsible for improving and updating the law) has just published its consultation paper on a new scheme to govern ‘deprivations of liberty’, cases where disabled people are subject to continued supervision and control and are not free to leave where they live. In developing their thinking the Law Commission team have shown a real interest in #LBBill and a number of our ideas our featured and discussed within the consultation. We now need you all to respond to the consultation to ask the Law Commission to adopt as many of the #LBBill principles as possible in their draft legislation. As the Law Commission has an excellent strike rate at getting its draft bills adopted this could be an excellent route to get the #LBBill ideas into law.

2. The new Care Minister, Alistair Burt, has confirmed that there will be a response to the ‘No Right Ignored’ Green Paper in the autumn. The Green Paper has been criticised by some (see the response from People First England) but it did put forward a version of some of the ideas from #LBBill. After the summer we will be pressing the government to introduce legislation in line with #LBBill as its response to the Green Paper, that was what we asked for in the campaign response and we know Inclusion London also asked for this, we hope other individual supporters and organisations did too. We hope people will lobby their MPs about this when they return in September.

So what have we learned from the process of trying to get a sponsor for #LBBill after this year’s private member’s bill ballot? Here are some initial thoughts:

1. The supporters of #JusticeforLB and #LBBill continue to be brilliant in their passion and commitment to the cause. 337 MPs were contacted, with many of you managing to get your MPs engaged and willing to discuss the issues in the Bill. Unfortunately none of these MPs won the ballot this year, which is the nature of a lottery like this.

2. With some notable exceptions, MPs are not yet ready, willing and/or able to engage properly with online campaigning. The level of response to tweets to MPs was low. MPs did better with email, but even then a surprising number of emails from constituents went ignored. Lots of others to Conservative MPs got identical template responses, which on the plus side at least means we got their attention sufficiently for someone to produce a template! We may need more offline campaigning next year. If people turn up to MPs’ surgeries in person they are a lot less easy to ignore than an email or tweet.

3. We almost certainly need to start earlier, and we could make use of some of the Parliamentary processes like All Party Parliamentary Groups to help get MPs ‘warmed up’ to the Bill before they get lobbied by their constituents. Of course, next year we will have the benefit of all this year’s work to build on.

4. None of the big disability organisations have really got behind the Bill. The National Autistic Society and Mencap sent a tweet each in support, but as far as we know that was the limit of the big charities’ public support. By contrast there has been brilliant active support from some disabled people’s organisations and individual disability campaigners. Would active support from the big charities have made a real difference this time? We’ll never know, perhaps we’ll find out in 2016.

5. There are fewer disability champions in the House of Commons that you might expect, and certainly fewer than we need. As such we all have a responsibility to make sure our MPs know that disability rights issues must be a priority.

So the struggle will continue into 2016 and beyond. But hey, why should we expect to change the law in short time when it’s taken two years to get precisely zero justice for LB himself?

All comments and suggestions on next steps are welcome below. You can also post any ideas here about the content of Draft 2 of the Bill or email us. We would very much appreciate events being held by local groups to discuss the Bill in the coming months, all the resources you should need are here.

What a phenomenal 24 hours in the Justice Shed! Thanks to all of you we now know the first hundred MPs have been informed about/asked to support the #LBBill. 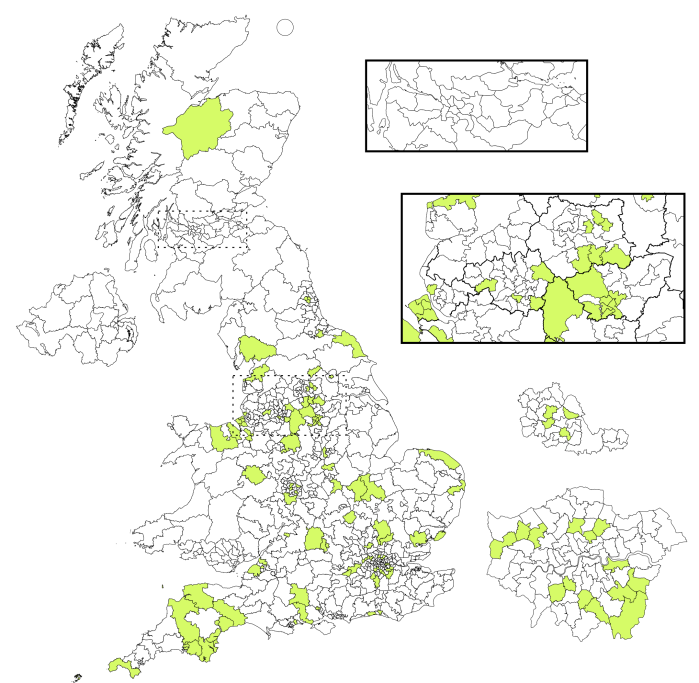 In true #JusticeforLB fashion we’ve needed to rely on our amazing ‘crowd’ to get to this point and we’re extremely grateful to each and every one of you who has emailed, tweeted, written or messaged their MP.

The Private Members Bill ballot happens in ten days on Thursday 4 June, and we’d like to reach many, many more MPs before then, so if you’ve not had a chance yet please do contact them. We’re hoping to turn the whole map green.

Please still contact your MP even if you’ve seen someone else already has done so; the more they get the message that this is important to their constituents, the greater our chance of change.

Together we can improve things for disabled people, not bad for a bit of bank holiday activism. 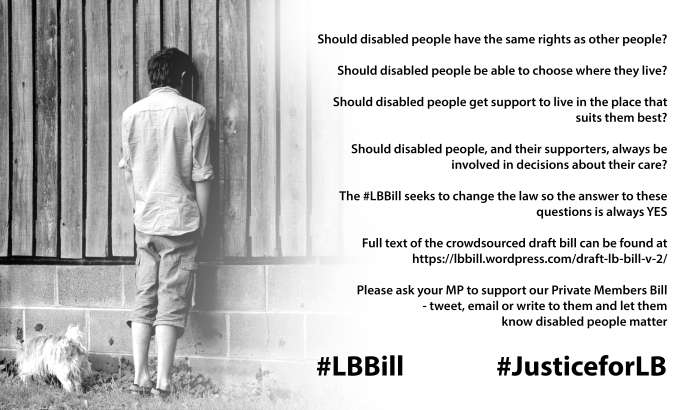 For those of you following #107days this is a duplicate post – for anyone who isn’t this is for your information and action:

The #LBBill is an idea to change the law for disabled people so that they have more control over what happens in their lives. We need your help to achieve that.

We need to promote the #LBBill to all the MPs (new and old) now in Westminster. You can read the latest draft by clicking here or on the tab at the top of the page. As with everything #JusticeforLB it has been developed organically and collaboratively, gathering feedback from far and wide including hundreds of disabled people, family members and allies. You can watch a short film (6 mins) about the #LBBill, where it came from and why it’s important here:

We need to contact as many MPs as possible to make them aware of the #LBBill and ask for their support in the Private Member’s Ballot. You can write to your MP via the WriteToThem website (it’ll even tell you who your MP is if you’re not sure); you could also tweet your MP and ask them to pledge their support to the Bill. If you’re unsure of what to say, you could include any of the following:

Please tell your MP that you support the #JusticeforLB campign and that you’re asking them to support a Private Members Bill drafted by the campaign. Please also explain that supporters of the campaign have come together to draft a Bill which would promote and protect disabled people’s right to live in the community with choices equal to others and the support they need. It has become known as ‘LB Bill’ in memory of Connor Sparrowhawk (who was known as LB or Laughing Boy).

Your MP might like to know that the Bill is on its second draft and has had feedback from hundreds of disabled people, family members and allies. The Bill has mass support, as you can see by clicking here or on the supporters tab above. It builds on existing legislation, including the Care Act 2014.

Sign off encouraging your MP to support this Bill and why not ask them to encourage their colleagues to do so. Also encourage them, if they are eligible for and successful in the Private Members Bill ballot, to sponsor the Bill. It would help us if you asked them to reply to let you know whether they support the Bill. It takes two minutes to pledge their support and they can do so here: http://eepurl.com/73mXX

Please add a comment to the #107days post with your MP’s name (and their party and your constituency if you know it) once you’ve contacted them directly, this will help us keep track on how many MPs know about the Bill (and commenting there will keep all the names in one place). If your MP replies and has any specific questions or wishes to discuss the #LBBill then they can email us at LBBillFeedback@gmail.com

We look forward to the pledges of support flooding in, there are 600 MPs so we’ve quite a lot of work to do!